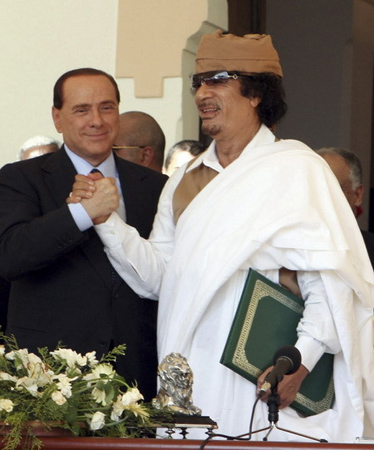 BENGHAZI, Libya (AFP) — Italian Prime Minister Silvio Berlusconi on Saturday apologised to Libya for damage inflicted by Italy during the colonial era and signed a five-billion-dollar investment deal by way of compensation.

Berlusconi made the apology during a visit to the Mediterranean city of Benghazi for a meeting with Libyan leader Moamer Kadhafi to seal a cooperation accord with the oil-rich north African nation.

“It is my duty, as a head of government, to express to you in the name of the Italian people our regret and apologies for the deep wounds that we have caused you,” said Berlusconi, whose comments were translated into Arabic.

He and Kadhafi then signed a “friendship and cooperation agreement” aimed at recompensing Libya for damage incurred during the colonial era.

“The accord will provide for 200 million dollars a year over the next 25 years through investments in infrastructure projects in Libya,” Berlusconi said.

“This agreement should put an end to 40 years of discord. It is a concrete and moral acknowledgement of the damage inflicted on Libya by Italy during the colonial era,” he earlier told reporters.

The signing ceremony took place in the garden of a palace occupied by the Italian governor in colonial times.

Berlusconi then bowed before the son of the hero of Libyan resistance against the Italian occupiers, Omar Mokhtar, in a symbolic gesture.

“This is an historic moment when two brave men acknowledge the defeat of colonialism,” Kadhafi said, raising his arms in a sign of victory.

“The Libyan people endured injustice and were attacked in their homes and they deserve an apology and compensation,” he added before a crowd which included diplomats and the children and grandchildren of Libyan resistance heroes.

Formerly part of the Ottoman Empire, Libya was occupied by Italy in 1911 before becoming a colony in the 1930s. The country gained its independence in 1951 after a brief period under a UN-mandated Franco-British administration.

Italy and Libya have spent years negotiating a wide-ranging treaty to cover compensation for Rome’s military occupation and colonisation.

An association representing Italians expelled from Libya in 1970 denounced Rome in a statement on Saturday for compensating Libya and not repatriated Italians.

It said Berlusconi should have “a sudden burst of dignity, humanity and respect so as to finally give satisfaction… to the 20,000 Italian citizens who are still waiting for fair compensation from their government.”

US Secretary of State Condoleezza Rice is set to follow in Berlusconi’s footsteps next week, for the first visit by such a high-ranking US official to Libya since 1953.

Berlusconi, on his second trip to Libya since June, said that among the major projects to be financed by Italy will be a coastal motorway from the Tunisian border to Egypt.

Rome will also fund house construction, scholarships for Libyan students to study in Italy and pensions for those mutilated by landmines laid by the Italian military.

The agreement will also cover cooperation on the fight against illegal immigration, which Berlusconi termed a battle “against slave traders.”

Funding for the coastal highway — previously estimated to cost three billion euros (4.65 billion dollars) — was promised by Berlusconi on a visit to Tripoli in 2004, when he headed a previous administration.

When the two leaders met in June, Berlusconi was pushing for the rapid implementation of a December 2007 accord on joint maritime patrols to curtail the flow of thousands of illegal immigrants from Africa to Europe.

Italian shores, especially the small island of Lampedusa south of Sicily, are a favourite destination for those making the crossing from North Africa in the hope of a new life in Europe, despite the perilous journey.

Also on Saturday Italy returned a Roman statue of the goddess Venus dating back to the second century which was found in 1913 by Italian troops near the ruins of the Greek and Roman settlement of Cyrene, on the Libyan coast.

Berlusconi’s visit to Benghazi 1,000 kilometres (650 miles) east of Tripoli coincides with the anniversary of the coup that brought Kadhafi to power on September 1, 1969.