In the evening of Saturday August 31, Semayawi Party headquarters around Ginfle, Addis Ababa, was buzzing like a bee hive as nearly one hundred party activists and organizers were busy making posters, writing slogans, stacking flags and other paraphernalia needed for a colorful rally. They were making the final push for a peaceful demonstration they had planned to hold the next morning with their supporters. 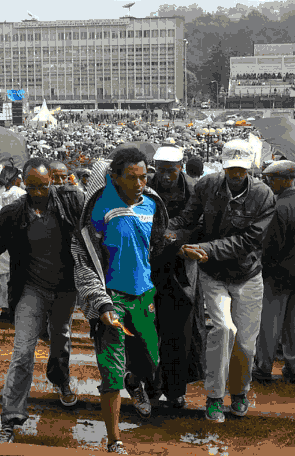 These peaceful and law-abiding citizens were doing what true political activists were supposed to do. They wanted to demand justice and freedom. They wanted to petition their rulers to respects the rights of citizens who are being routinely abused, tortured and killed in broad daylight. They only wanted to ask the thuggish TPLF regime to free all prisoners of conscience jailed on trumped-up terrorism and treason charges. They wanted to demand the TPLF to respect its own constitution. They were not preparing to commit acts of terrorism or bank robbery.

Suddenly there was a blackout. Electricity to Semayawi’s headquarters was cut off. Apparently hundreds of heavily armed ‘federal police’ troopers had already besieged the office like terrorists.

Yidenekachew Kebede, the party’s legal affairs head and coordinator of the rally was heading to his office. ESAT reached him in good time on his cell phone. He was describing the situation in detail. He was very upset that such a criminality happens with impunity. He was outraged that the TPLF is treating Ethiopians worse than prisoners of war in their own country.

The young lawyer was outraged that the constitution, which the TPLF never respected, was being violated by armed thugs and criminals again. It was another evidence of lawlessness and tyranny that the TPLF has imposed on the people of Ethiopia. Those who were eager to demand freedom and justice for their people became victims of criminality. While he was telling ESAT that his colleagues and friends were under siege, a federal police officer snatched his phone and the line was cut off. Apparently he was detained.

TPLF federal squad broke into the office and ransacked and beat Semayawi’s leaders and members. The party’s chairman Eng. Yilkal Getnet was also arrested and taken to a police station around Gedam Sefer. The thugs reportedly targeted everyone and even savagely attacked and kicked women. They detained all of Semayawi’s operatives found on the party’s premises for hours, kicked and tortured them. Scores of people were even made to roll over mud and dung in a bid to humiliate and degrade them. They were stat at and insulted by TPLF’s thugs.

According to Yilkal, he was released after a few hours. Other members who were also said to have been roughed up, beaten up and tortured were also freed. But the headquarters has reportedly been trashed. Documents, equipment, and all the materials prepared for the rally were taken away by the federal squad.

Ethiopians in the Diaspora has been expressing outrage on Facebook and Paltalk rooms. What has been the focus of angry discussion is how long the state-sponsored terrorism can go on. The decision to launch an illegal attack against a political party operating legally is another affront to law and order. TPLF’s thuggery and lawlessness has posed serious challenges to every law-abiding citizen. People are abused and tortured without any ground.

Semayawi is a relatively budding political party that should have been accorded protection. But TPLF’s paranoid has reached a critical and dangerous point. The more cornered it is, the more dangerous it is becoming. The attack against Semawi only reveals the level of fear gripping the TPLF and its cronies.

In a press release it issued, Semayawi has vowed to press for justice and rule of law. It emphasized that nothing will distract it from making demands and voicing the concerns of the people of Ethiopia.

In the meantime, Muslim Ethiopians are also being hunted down across the country. TPLF organized a rally in the metropolis on the day and at the venue where Semayawi had planned to stage a protest demonstration. The worst part is that TPLF is trying to create religious conflict among Christians and Muslims. The two religions have co-existed harmoniously for over a millennium. The futile efforts only reveal the fact that TPLF is desperate to survive.

No matter what the TPLF does, the struggle for equality, dignity, justice and freedom continues….