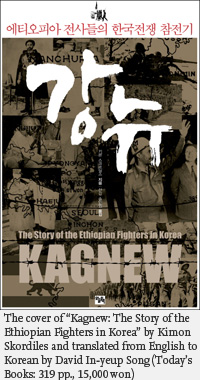 A Greek war correspondent travels across the globe to cover the first armed clash of the Cold War. But instead of trailing the battlefield feats of his countrymen in the Korean War (1950-53), he ends up writing a book on Ethiopian warriors ― yes, warriors, like the stuff of ancient Greek myths.

It’s not hard to see why the soldiers of Ethiopia, one of the 21 U.N. member nations to send troops into the inter-Korean conflict, struck the fancy of the journalist: The Kagnew Battalion, bound by the motto “one for all and all for one” to “fight until we win or die,” won all 235 of its battles against North Korean forces.

And true to their motto, there were 124 deaths and 536 injuries but not a single one of the 6,037 warriors went missing or became a prisoner of war. They literally either died or survived to a victorious end, Kimon Skordiles observes in his book.

“Kagnew: The Story of Ethiopian Fighters in Korea,” published in 1954 shortly after the armistice was signed, is now finally available in Korean (Today’s Books: 319 pp., 15,000 won) on the 60th anniversary of the outbreak of the Korean War.

It sheds light upon an overlooked past but moreover, like most invaluable history lessons, serves as a window to the future. Most South Koreans today however are oblivious of such a sacrifice and the fact that the Korea International Cooperation Agency (KOICA), the governmental aid relief organization, is making waves in Ethiopia ― lending help to the country that once was giving aid.

Though the book chronicles extraordinary battles, a most touching instance of heroism and friendship shines through in a rather minor incident. One fateful morning, the enemy opened fire at South Korean civilians who were employed to lay wires. Melese Berihun of the 1st company heard the cries of a man who did not have time to escape and jumped to the rescue ― “The Ethiopian soldier did not understand what the wounded Korean was saying; but the painful cries were directed not only to the ears, but to the heart.”

[David In-yeup Song, who translated into Korean a Greek war correspondent’s 1954 account of Ethiopian soldiers’ contributions during the Korean War (1950-53), speaks to The Korea Times during a recent interview in Seoul. Song wishes the younger generation to be inspired by the great courage and integrity of the Kagnew Battalion. / Korea Times photo by Shim Hyun-chul]

A shell fell nearby and the two men died in each other’s arms. They were buried in a common grave in Busan ― which serves as “a symbol of their common sacrifice, in a common struggle, for a common goal,” writes Skordiles. “The mixed blood is the foundation of friendship and a symbol of unity between Ethiopian and Korean. It is the fire of comradeship that came alive in the dark days of the Korean War, the friendship that will remain in perpetuation in the history through the joining of the hands of the two countries.”

David In-yeup Song, who served as chief representative of KOICA in Ethiopia for two years, took the initiative to translate the account. “I came across the book a couple months after I arrived in Ethiopia. I knew Ethiopia had sent troops but I was surprised to learn about their amazing achievements,” he said in a recent Korea Times interview in Seoul. He was in town for a few days before assuming a new post in earthquake-struck Haiti. 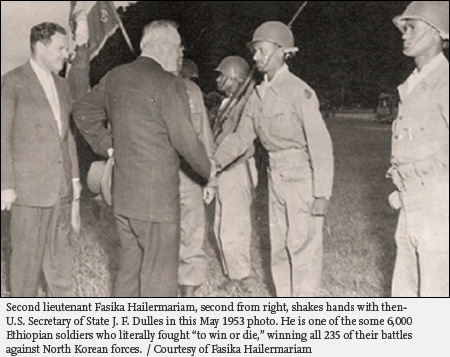 “I spent sleepless nights reading the book. I decided to translate it because it passes on an important lesson to the younger generation. They enjoy a materially rich life thanks to the sacrifice of such warriors like the Ethiopians, but many don’t even know when the Korean War broke out. Moreover, they can learn about integrity, teamwork and courage from the Kagnew Batallion,” he said.

The book introduces how Ethiopia became involved in the Korean War, and invites readers to explore the colorful history and character of the country.

For then-Emperor Haile Selassie the Korean War was a “holy” mission for world peace and collective security, to stop the further spread of ideological conflict. He thus dispatched members of the elite royal guard, the most physically adept and intelligent soldiers. Their perfect battle score did not go unnoticed, as then-U.S. Secretary of State J. F. Dulles paid the battalion a visit during a trip to Korea in 1953.

The Korean version of “Kagnew” however is more than a simple translation. Song places Skordiles’ work in a more contemporary context by tracing the legacy of the Ethiopian warriors, through interviews with some of the 400 veterans who are alive today. Various facts, figures and anecdotes are provided in both Korean and English. 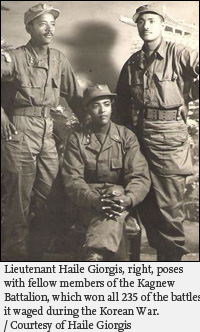 Among them, Haile Giorgis, who served as 2nd lieutenant during the war, became promoted as military protocol chief to the emperor in 1972. Quite ironically, however, the emperor was overthrown in a communist coup, and during a spell of red terror through the 1980s, the Korean War veterans, once honored heroes, were forced to conceal the fact that they had fought against communist forces. Giorgis lived a reclusive life until the early 1990s.

Last month, some 40 members of the Korean War Veterans Association of Ethiopia recently visited Seoul to witness what had become of the impoverished country they fought in as young men.

“Ethiopians take note of Korea’s rapid economic development as a model for their country’s own growth, and the local press widely covers KOICA’s efforts. Korea on the other hand must not forget Ethiopia’s help in the past. There is much room for friendship to bloom anew,” he said.

Today KOICA is helping build schools, drinking water facilities and welfare centers for women and children. Song urged Koreans to take more interest in Ethiopia’s gourmet coffee and take note of the country’s rich history and the fact that it is home to the capital of the African Union.

This is Song’s second translation project after introducing Koreans to Jean Sasson’s “Love in a Torn Land,” which chronicles a true story set in war-torn Iraq.

15 thoughts on “Story of the valiant Ethiopian fighters in Korea”